Home » The Sunshine, Mud & Montessori Blog » Our Montessori Homeschool – Behind the Scenes Week 1

Our Montessori Homeschool – Behind the Scenes Week 1 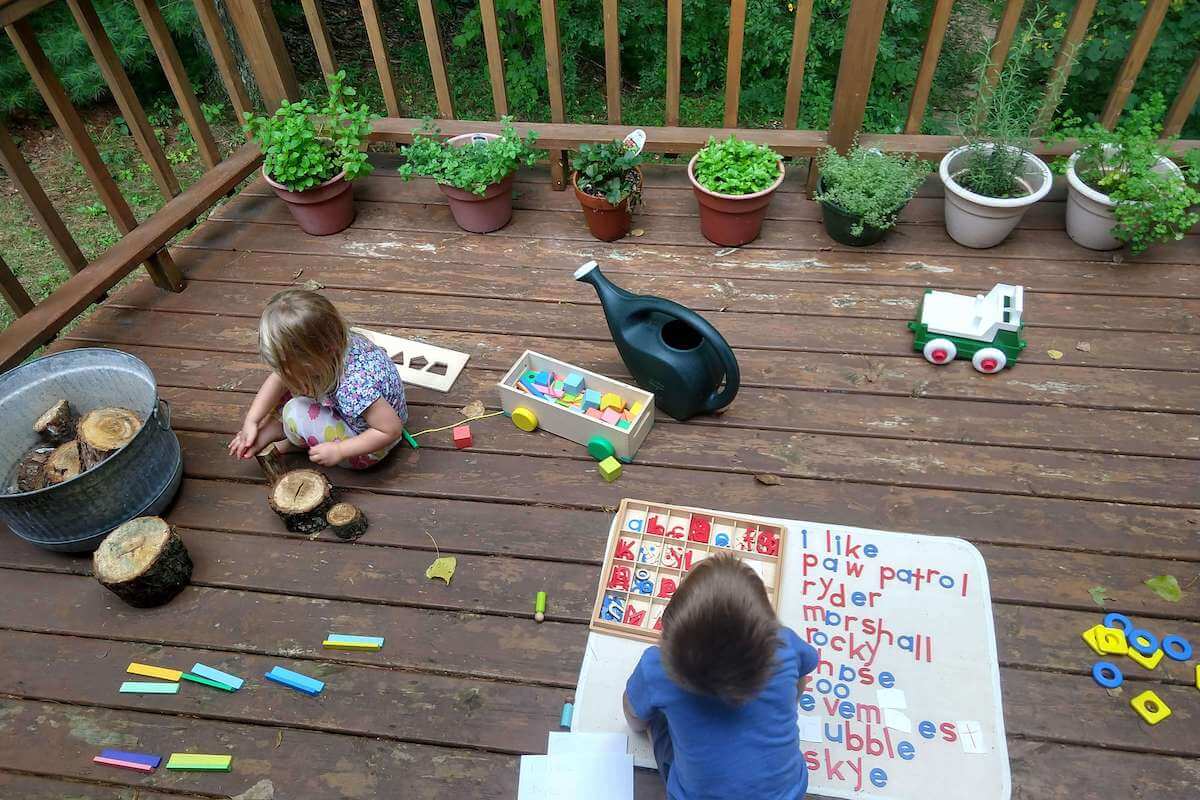 Get a behind-the-scenes peek at our Montessori homeschool for a 4.5-year-old and 2.5 year old. Ideas or Montessori activities & materials!

We’re homeschooling our almost 5-year-old and 2.5-year-old this year. Every month or so I’ll be sharing a detailed look at what we did one week in our Montessori homeschool classroom.

But first, here are a few details on our overall approach to Montessori Homeschool at this stage.

Our Approach to Montessori Homeschool

Now, on to the “behind the scenes” peek. This is what one week in August looked like for our Montessori homeschool setup:

A Week of Montessori Homeschool

As we do most weeks, we took one morning off from more structured school work. We went to a lovely state park that is just ten minutes from the house. It turned out the trail was flooded from all of the rain we’ve been getting but we walked around the pretty neighborhood by the park and then found a nice spot to have a snack and practice climbing trees!

I then read some Frog and Toad to the children before we went home. I love bringing books with us when we go to parks or go to the beach. I find it’s a great way to end on a calm note and transition into leaving.

Thoughts on the Week

I loved this week because James was engaged and enthusiastic about his work all week. (This is not always the case!) He didn’t do as much math as I’d necessarily like but I’ve noticed he really goes in waves with what he’s more drawn toward – math, language, etc. and I’m trying my best to follow the child and trust that it all balances out in the end.

Another thing I loved about this week was watching James’s interest in sewing grow. My friend and former coworker Natalie is an expert seamstress and I always loved watching her share her love of sewing with the kids in our class. That said, we’ve been traveling for the past year and I didn’t manage to include nearly as much sewing as I would have liked. I’m super pleased to include more and more sewing on our Montessori homeschool shelves and to watch James and Lilahs’ interest and skills grow.

Finally, I want to note that Lilah is super independent and easily entertains herself most of the time. This makes our homeschool efforts SO much easier. This was not the case when she was younger so don’t get discouraged if you’re trying to balance homeschooling an older child with a baby or toddler who is in a stage where they need lots of attention 🙂

Lifecycle of a Frog

Sewing Box (I read about this on this post from How We Montessori and we love it!)

This post contains affiliate links – thank you for your support!