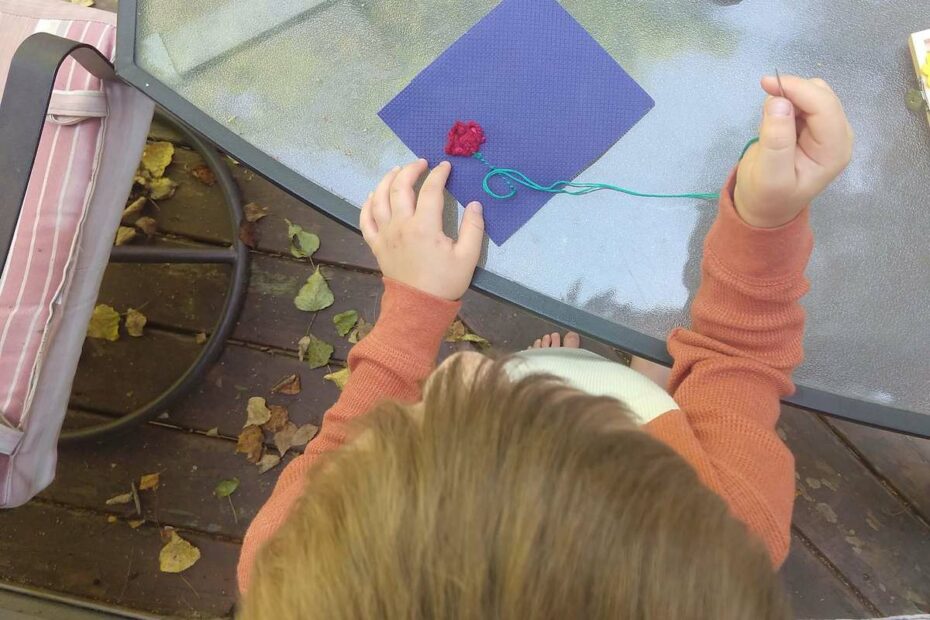 A simple color mixing activity was definitely the biggest hit in this week of Montessori Homeschool. We also did sewing & bookmaking.

I’m back with another detailed look at a week of our Montessori homeschool. This was a good week with lots of fun science and lots of time spent working outside in the beautiful Wisconsin early fall weather.

James and Lilah’s grandparents were here this morning so we spent some time with them and then went to the library.

I can’t tell you how happy it makes me to be able to go to the library again this year! It was closed last year and, while we have many beautiful children’s books, a lot of them are in storage right now. (We sold out house in Austin and haven’t yet chosen where to make our next permanent home so are currently living in my in-laws’ beautiful lake house in Wisconsin.)

I usually put some books on hold and then also let my kids choose some while we’re at the library. I let them choose whatever they want. While I love having beautiful Montessori-friendly books in our home, I also think it’s important to let kids choose the books they’re drawn to.

Fostering a love of reading is super important to me and sometimes that means letting kids choose what they want to read, even if it isn’t the “best book.”

One of the best parts of having the library open is the access to lots of early reader books for James to read. We have some at home of course, but he is loving the variety.

We started the morning with one of the new early readers we got from the library, Bones and the Birthday Mystery. This book was a big hit both in terms of matching his reading level and the story. He’s now reading this one in the series and loving it as well!

We always start the day with me reading to the kids and then James reading to us. He used to complain about this, but now that he can read real stories, rather than just simple readers like Bob books, he sometimes wants to read more!

After reading, James chose his travel journal to work on. This is a small notebook we started using when we were traveling a lot last year. He dictates to me things he wants to remember about our trips and I write them down. He then illustrates.

At this age, I think it’s important to include different types of “writing.” Like many children, James’s ability to physically write words doesn’t yet match the level of thought he wants to express. Choosing which words to use and dictating a story or memory is a great skill, apart from handwriting! Don’t feel discouraged if your child wants to dictate to you rather than write.

Also, I highly recommend a travel journal or just a memory journal! It’s so fun to go back and read about memories I’ve already forgotten in his journal.

After journaling, James did about half of the Hundred Board, saving the other half for a different day. He then did some multiplication equations with the colored bead box.

One note – while this looks like a successful day, it was actually the hardest of the week by far and included a lot of whining and arguing. I think this was mostly due to conflicting needs between my two children as Lilah, my 2.5-year-old, has just recently switched out of diapers and needed lots of help with that. Just want to keep it real…some days are hard!

On Wednesday, we started with reading and then James did the Movable Alphabet, practicing the “ar” phonogram. I try to take a mental note of the phonograms he needs to practice when he’s reading aloud.

After that, we spent the rest of the morning doing a simple color mixing experiment. As I mentioned, we’re trying to add more hands-on, fun science into our routine and this was a great place to start.

Both Lilah and James loved this color mixing activity and worked on this for about an hour and a half. James started out more methodically while, for Lilah, this was a full-on sensory experience.

Even with simple experiments like this one, I like to include an element of the scientific process. We write down our “research question,” a hypothesis, and our conclusion after the experiment.

We kept our color mixing activity really simple. I gave them each a tray with small cups of red, blue, and yellow water, another cup to mix colors in, and a pipette to transfer the water. When they were done with a mixture, they poured it into a discard cup. This work is now on their shelves so they can choose it any time they want!

Experiences like this can be super messy, but that’s okay! Sometimes cleaning up is the real work and can help children learn follow-through and resilience. Cleanup is a big part of Montessori for these ages.

After reading on Thursday, James said he wanted to make a book. He enjoys making all sorts of books, from silly joke books to research books.

We were working outside that day and our potted herbs were nearby so I asked him if he wanted to make a book about herbs. He cut a clipping from each of our herb plants, taped it in his book, and labeled it. Lilah wanted to make a book too and she really enjoyed smelling and tasting the herbs.

It was a nice cool morning so I made them each a mug of mint tea afterward and Lilah, in particular, loved it!

After this, we put away schoolwork for the day and walked to a nearby dam they like to visit. I’m trying to balance consistent academic work with taking full advantage of the beautiful Wisconsin fall before winter hits!

After reading, James finished the Hundred Board from earlier in the week and then took a break with a nuts and bolts work he loves.

Lilah enjoyed practicing her letter sounds with our Montessori abc book as well as this beautiful book. We only do this when she wants to, but she’s started learning a lot of the letter sounds and asking about letters when we read other books. I’m going to get sandpaper letters for her soon – I’d love recommendations if anyone has a set of Sandpaper letters they love!

James spent the rest of the morning on a sewing project for his cousin’s birthday! He wanted to make her a present and he’s been so into sewing lately.

Funny story – I was going to take a picture of his finished product later because it really was beautiful. I asked him where it was later and he said he had already wrapped it in some newspaper and added it to the other gifts we were bringing. I love the independence!

Thoughts on the Week

This week had more “projects” versus independent work than a lot of our Montessori homeschool weeks. I don’t think this is necessarily a good or a bad thing, just something I noticed.

Whenever I notice James’s interest waning and he begins resisting school work, I try to think of ways to reignite his curiosity and desire to learn. I find that a new science experiment or project often does the trick and spurs him on to happily work again afterward.

Overall, this felt like a good week, especially how much James loved reading this week!

Want more? Read our Montessori Homeschool Behind the Scenes Week 1!

This post contains affiliate links, thank you for your support!