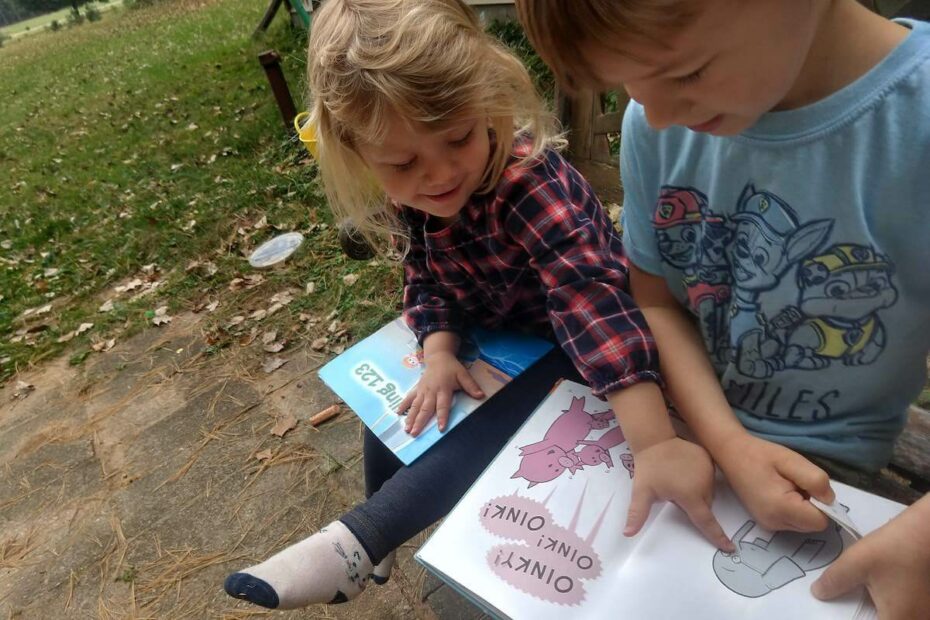 Our Montessori Homeschool included geography, number chains, research, and more this week! Get a realistic look at Montessori homeschool.

I’m back with another detailed peek behind the scenes of what we did in Montessori homeschool. I try to share one week in detail every month or so to show what the day-to-day rhythm looks like in our house right now with a 2 1/2 year-old and 5-year-old.

I’d love to hear what you’ve been up to with your kids lately in the comments!

We got off to a bit of a late start because this was a week after James’s 5th birthday and he is all-in on the Lego robot we got him. He and Lilah were playing with it peacefully and whenever they’re playing so nicely together, I try not to mess with it.

When they eventually emerged from the basement, we began with reading, as always. I read to the kids and then James finished the latest Jeffrey Bones book he’s been reading aloud.

After reading, I gave James a lesson on the vertebrates sorting work I recently added to my printables page! It was a hit with both kids. (Lilah can’t sort the images, but enjoys looking at the animals and learning their names.)

After that, James worked on handwriting. He’s done some handwriting workbooks in the past but right now we’re working through a blank primary notepad. I asked him which letters or numbers he’s found challenging to write lately and he said numbers with curves (0, 6, 9). After I wrote them in yellow, he traced them and then he practiced writing them on his own on the line below. I also try to notice letters and numbers he struggles to write or writes backward and suggest we practice those sometimes.

While James practiced handwriting, Lilah worked on our Waseca Continents Mat, which is probably my personal favorite material we own. I originally got this for James but Lilah loves it.

She comes to me with each animal and asks me which continent it belongs on and then places it in the correct spot. The animals also each have a little picture of the continent on the back for children to work independently, but at 2 1/2, she just asks me. She loves singing the continents song and learning the animal names!

I’ve mentioned this before, but I never “make” Lilah do work in the morning. Sometimes she watches, sometimes she plays and looks at books, and sometimes she chooses work from the shelf.

Finally, we wrapped up the morning by working on thank you cards for James’s recent birthday gifts. For some reason, while he doesn’t usually choose to draw for its own sake, he loves making drawings on cards for people, which I fully support!

After reading books, James did a golden beads equation. At this point, he tries to avoid golden beads but he seems to enjoy it pretty well after he gets going. I think it’s just such a big work, it can seem like a lot to take on so it takes a bit of encouragement to get him going. He’s working on addition with exchanging.

After golden beads, James wanted to do some sewing. He’s super into making homemade gifts right now and is working on a birthday present for my Dad 🙂

While James worked on sewing, Lilah requested to do the vertebrate classification work again! She needs help with it right now but loves it when I sit with her and we sort the cards together.

We also read some of the beautiful Animaliam book. This book beautifully displays invertebrates and the different classes of vertebrates so it pairs nicely with the sorting cards. The language is a bit advanced for my kids but they love looking at the pictures and I simplify the descriptions as I read.

Wednesday was library day! We didn’t make it to the library the week before so the kids were excited to go check out some new books.

James was particularly excited to get the second Finn Caspian book. He’s SO into the Finn Caspian podcast and is loving the chapter books based on the series.

I also asked James to choose a book from the science section to research. I told him he could choose anything he wanted and we’d do a research project on it. He chose a book about snails and slugs. I’m planning to share more about how we approach research soon!

I knew it was supposed to rain later in the day so we made sure to get outside for school work in the morning. I never regret this decision!

James loves reading Mo Willems’ Elephant and Piggie books. They don’t have too many words but the stories are funny, perfect for early readers! We get a new one pretty much every time we visit the library.

After reading, I showed James a lesson on the short ten chain. I am just using beads from our Golden Beads and Montessori Bead Box for the number chain lessons but if you want a more formal version, this one looks nice and reasonably priced.

The ten chain was really easy for him so I look forward to introducing trickier ones soon!

After the ten chain, James asked to work on his snail research project. This is always one of his favorite activities!

I loved the way he approached his illustration! He wanted to embroider the snail on the page, so he sewed the outline of the shell, colored it in with a brown pencil, and then drew the rest of the snail.

Meanwhile, Lilah played her new favorite game she invented, called “My World”. She throws leaves up in the air to rain down on her and says “my beautiful world” repeatedly. It’s pretty great.

We were expecting guests for the weekend so we started the morning by baking apple muffins together. I don’t include a ton of Practical Life work on the kids’ shelves but I do make an effort to include them in household tasks like this.

After baking, we did some reading and James built Halloween words with the Movable Alphabet. (There’s a paper letter because we’ve made a few extras for letters we often run out of.) This was one of those mornings when Lilah entertained herself with pretend games and looking at books all morning. I love listening in on her little games, it always makes me smile.

After Movable Alphabet, James wanted to make gifts for the people visiting us so he worked on that and Lilah did some stickers.

That wraps up our week! All in all, it was a good one.

What was your favorite part of the week?

This post contains affiliate links. Thank you for your support!